The Federal Government of Nigeria has assured the Regional President of Africa Regional Council of Women, ARCW, Dr Gloria Laraba Shoda of its readiness to support the Council towards actualising its mission.

This was disclosed by the Secretary to the Government of the Federation, SGF, Mr Boss Mustapha, when Dr(Mrs) Shoda led a delegation of the ARCW on a courtesy visit to him in his Abuja office. 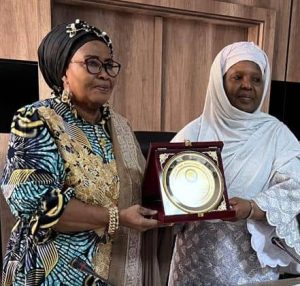 Picture: L-R: Dr Gloria Laraba Shoda and the Special Adviser to the President, who represented the SGF

The SGF, who was represented by the Special Adviser to the President on Policy and Coordination, Dr.(Mrs) Habiba Lawal, assured the Council of the Federal Government’s support for the attainment of its lofty programmes and policies.

Mustapha congratulated Dr. (Mrs) Shoda on her election victory as the President of ARCW and her emergence as Board member of the International Women Council (IWC).

Dr (Mrs) Shoda’s appointment into the Board of ICW, according to the SGF, was a great feat that deserved worthy commendation; for being the first black woman to be so elected to occupy such an exalted position in the global organisation.

The SGF then admonished her to continue to use the wealth of her experience in this her current leadership position to better the lives of people, especially the womenfolk, through empowerment programmes, the fight against gender-based violence and other discriminatory policies/ practices against women.

Earlier, while briefing the SGF on some of her activities since assuming the office of the Regional President of ARCW, Dr. (Mrs.) Shoda informed the SGF that the headquarters of ARCW has been moved to Abuja- Nigeria, which helps to boost the image of Nigeria in the comity of nations.

She expressed gratitude for the support the organisation has received from the Federal Government and called for continuous collaboration.

The Regional President also informed the SGF of the appointments of his wife, Mrs. Olufunmilayo Mustapha and the Special Adviser to the President, Dr. (Mrs)Lawal as Fellows of the ARCW.

The Daily Crucible recalls that while also holding forte as National president of National Council of Women Societies, NCWS, Dr Gloria Laraba Shoda, had in February 2022, called on President Muhammadu Buhari led administration to increase the number of women in government.

Shoda who made the call at the time in Birnin Kebbi during the affirmation of the executives of the NCWS state chapter  noted that, the percentage of women in government is just about 6% whereas in other African nations such as Uganda, they have about 60% representations.

She explained that based on the number of women in government positions in Nigeria, the female gender are not adequately represented at the National level although women occupy the finance, humanitarian and women affairs seats today.

Fight Over Leftover Fuel Leaves One Dead In Lagos