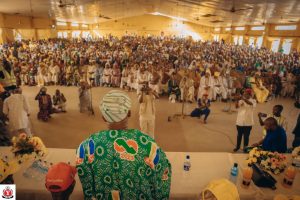 The Olota of Ota, Oba (Professor) Abdulkabir Adeyemi Obalanlege, the Forum of Awori Traditional Rulers and Yewa Obas in Ado Odo Ota LGA have assured Senator Solomon Adeola, the chairman of Senate Committee on Finance and the APC Senatorial Candidate for Ogun West of victory in the February 25 Presidential and National Assembly election.

The Olota and others hinged the assurance on Senator Adeola’s  antecedents and his good deeds for Ogun West even before becoming the senator of the district.

At the palace of Olota of Ota where the senator went on a courtesy call as part of his 5 Days campaign tour of the 16 wards of Ado Odo Ota LGA 0ber the weekend, the traditional rulers speaking through selected kings and the Olota stated that voting for Senator Adeola and all APC candidates is not about politics but about the development of the senatorial district as the coming of Senator Adeola and the development he is already attracting to the areas is a good sign that better days are ahead with Senator Adeola as senator of Ogun West.

Oba Shyllon Adedayo, the Alagbado of Agbado said it is unprecedented in a long while for an aspirant to tour the whole LGA to see things for himself and come out that the largest LGA in Ogun State deserves special attention from government at all level adding that Senator Adeola has started well even before becoming a senator of Ogun West with the numerous projects he has started in the district.

“Senator Adeola has facilitated the ongoing construction of the critical Itele road, a major erosion control project is also ongoing in addition to 5 transformers he donated with N1million for energization. He also facilitated the training of many of our youth in various skills acquisition programme even before he become a senator representing us. We are assuring him of victory to continue what he is already doing,” he stated.

Another king, Oba Samuel Ojugbele , the Onilogbo of Ilogbo said they have not seen the kind of unprecedented representation that Senator Adeola did in Lagos West and is already doing in Ogun West even before his ultimate election adding that “ you have no opponent in this race as far as we are concern. Unfortunately, in a democracy, it is allowed for even mad men and imbeciles to contest.”

Their position was also supported by Oba Lukmon Agunbiade, the Alagbara of Agbara who stated that the senator has been taken care of the royal fathers over the years and as a fellow accountant professional he is sure that Senator Adeola is the best candidate for the Ogun West Senatorial district.

The Olota of Ota who presided over the courtesy call stated that for this electoral round and the interest of his people as Yorubas he is for all APC candidates from top to bottom adding that the royal fathers of Ado Odo Ota LGA in unison have stated their supportive position on the basis of the antecedents and performance of Senator Adeola.

“Senator Adeola is not disappointing us at all as he has started work even before his election as senator of Ogun West. Our people should maintain their lane by voting back APC at state and federal levels. They should not deviate at this time for development that is ongoing to be concluded” the foremost Awori king stated.

Addressing the royal fathers, Senator Adeola stated that he took time to tour all the 16 wards in the LGA to see their developmental challenges as well as present himself as their prospective senator adding that from what he saw the LGA deserve a special development attention from the government.

“During my tour I established the need for special attention and intervention for Ado Odo Ota LGA. I donated 10 transformers during my tour to various communities that will be supplied before the February 25 election while an equal number will come before May. I have facilitated the Itele road construction as well as a major erosion control project in Ota” he stated.

He said his election as well as other APC candidates is for the interest of Ogun West as the synergy of voting in candidates from top to bottom of APC will make continuation of development which he has already started seamless adding that one of the major highlight of his tour aside the infrastructure deficit is the issue of youth development in the right direction.

According to Chief Kayode Odunaro, Director, Media and Communications, Senator Adeola Campaign Organisation, Adeola later left the palace to meet stakeholders of the LGA comprising of professional bodies, religious bodies, artisan and trade groups and other bodies like NURTW, NUT and Tricycles Riders Association where he pledge to continue the effective representation he is noted for in Lagos West in Ogun West.