by The Daily Crucible
in Lifestyle
0

For young and upwardly looking Mr. Uthman Addul Mumeen, the journey to becoming a landlord at the Pelican Valley Estate Abeokuta, the Ogun State capital, where unusual homes happen, began like a dream some years ago when a friend suggested he should key into the Pelican package and buy land there when a plot of was selling at a price less than N3m per plot. 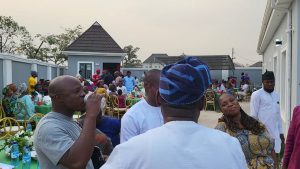 Shortly after the idea was put forward to Mumeen who live and work outside the country, he picked interest, believing he could get a plot at the site for a price initially thought, but the price moved up to N3.5m per plot. It just appreciated within a short space of time

And sensing that the price could soar away in no time, if he delayed any further, Mumeen elected to buy at N3.5m and started developing it gradually until late December 2022 when it was finished to taste.

Expectedly, on a Sunday this January, friends, relatives, family members and colleague – landlords joined him to warm up his house that wowed his guests in no small way.

As guests merry, they also prayed that his new Home will always be a haven filled with love, warm, good health and more prosperity.

Today, a plot of land in the estate goes for a price between N18m and N20m.

Elated Uthman Addul Mumeen was impressed that buying a land at the Pelican Valley estate, building on it and subsequently moving in were just seamless endeavours to him and without challenges from any quarters.

He noted that the peaceful experience is an attestation to the integrity of the estate, the promoter; Pelican Valley Nigeria Limited and the CEO, Dr. Babatunde Adeyemo.

“From the time of purchase of the land to the development of the site and completion of the house, I did not have issue or misunderstanding with anybody or group. None at all,” he said.

Mr. Uthman’s impression perfectly tallied with the earlier testimony of another client – a landlady in the estate, Mrs Adedotun Adedehinbo, who spoke glowingly about the Pelican Valley recently.

Mrs Adedehinbo had recalled with joy that she did not miss the opportunity to invest in the Pelican Valley package when the offer beckoned, vowing to do more business with them in the future without hesitation.

“When we wanted to buy land at the Estate, I was in doubt, so I have to pursue the proprietor – Dr Babatunde Adeyemo, with my husband to re-confirm the authenticity of the estate, today I’m happy that we bought the land.

“We met fully energized electricity here, fully armed security guards to ensure our safety, in fact, no Estate is like Pelican Valley,” she said.

Similarly, one of the lawyers of Pelican valley Nigeria limited, Bar. Hazan Yakubu, who also doubles as a neighbour of the CEO in his earlier apartment, described Dr Adeyemo as an “epitome of humility and an open-minded person with great spirits.”

The lawyer noted that some of the things that endeared the Pelican Valley to him and other people are the firm’s high emphasis on documentation, Goodwill and integrity which, he added, distinguished her from others.

“One thing I like this man for is that he emphasizes documentation which is what most of the clients are interested in.

“He is an epitome of humanity, he is a great man with a great spirit and an open-minded person,” he said.