No fewer than 2,931 residents selected across the 20 Local Government Areas of Ogun State will have access to the Federal Government cash grant under its Government Enterprise Empowerment Programme (GEEP)

The Minister of Humanitarian Affairs, Disaster Management and Social Development, Hajya Sadiya Farouq made this known during the flag-off of the Programme in Oke-Mosan, Abeokuta, saying GEEP was designed to give a lifting hand to many of the poorest and vulnerable citizens in the country.

Represented by the Director of Social Development in the Ministry, Mr. Taiwo Bashorun, the Minister added that the Programme consists of three signature schemes, which were, Tradermoni, Marketmoni and Farmermoni, noting that the grant was expected to increase the income and productive assets of target beneficiaries, admonishing them to make good use of it.

“I hope that the beneficiaries will use this opportunity to increase their income, enhance their food security and contribute towards improving their family’s livelihood. This grant will go a long way in supporting any serious woman to start a business. What is most important is how judiciously you utilise the money”, she said.

In his keynote address, the State Governor, Prince Dapo Abiodun, represented by the Commissioner for Special Duties and Intergovernmental Affairs, who also doubles as the State Focal Person for the National Social Investment Programme (NSIP), Hon. Olufemi Ilori-Odutan, commended the Federal Government’s gesture in alleviating poverty in the country through various interventions.

Abiodun, in a statement signed by the Press Officer, Min. of Special Duties and Intergovernmental Affairs, Mr. Owotomo Segun, noted that the government had done so much, through its Social Intervention Programmes (SIPs), urging the beneficiaries to ensure good use of the grant, to enhance their livings.

He reaffirmed the State’s support for the GEEP, which he said would provide a platform for rural women, youths and farmers as part of its social inclusion and poverty alleviation agenda.

Earlier in his welcome address, the Permanent Secretary in the Ministry, Mr. Lateef Benson said the Prince Dapo Abiodun-led administration would continue to empower and support the inactive population and vulnerable, adding that it was a symbolic representation of the Governor’s unwavering commitment towards alleviating poverty in the State.

Benson noted that the grant was geared towards empowering its people, to establish some trade and self-reliance, enjoining the beneficiaries to reciprocate the government’s gesture, by ensuring the money received was used for profitable ventures.

In her response, one of the beneficiaries, Mrs. Oladimeji Taiwo appreciated the Federal and State Governments for the assistance, promising not to disappoint them. 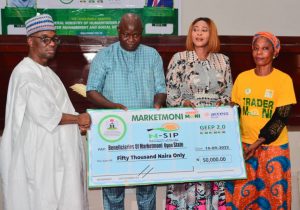