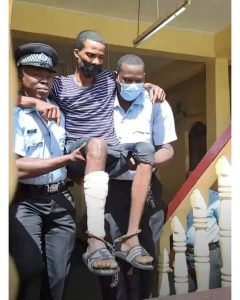 A 35-year-old Nigerian man, Bethel Ikenna Chimezie, who carried out a brazen attack at the official residence of Guyana President, Irfaan Ali, has been arraigned and afterwards remanded in prison following bid to eliminate a Presidential Guard as well as discharging a loaded firearm.

The Daily Crucible reports that Chimezie  at about 7:30 am, entered State House’s south-eastern guard room and demanded to see President Ali.

He allegedly pulled a knife and stabbed a policeman several times to his neck and other areas of his body.

According to the Guyana Police authority, Chimezie also snatched a pistol from a Presidential Guard, ran out of the guard room on to Carmichael Street and fired several shots while a 9MM pistol and seven 9MM spent shells were retrieved afterwards.

While trying to repel him, Chimezie was wounded. He along with the assaulted policeman, were then rushed to the Georgetown Public Hospital in a critical condition after the alleged botched attempt to assassinate the President of Guyana, Irfaan Ali.

He was reported to have undergone a series of surgeries for gunshot injures to his head, torso and leg that were inflicted when Presidential Guards opened fire on him even as the authority has now given directive on background check about him for link with any criminal group.

The Guyana Police Force had on Thursday, December 15,  forwarded a request to the International Criminal Police Organisation (INTERPOL) for more information on Chimezie over his daring knife and gun attack on the Presidential Guards at the Guyana State House that resulted in him being shot and injured.

“The GPF has requested via INTERPOL a comprehensive background check on him; also whether he has any criminal history or whether he is linked to any criminal group,” a senior police officer told Demerara Waves Online News.

He had to be helped into the courtroom by police officers from the court since he is still nursing a gunshot injury to a leg when the Presidential Guards succeeded in stopping on his track.

The second charge alleged that, on the same day and at the same location, he discharged a loaded firearm at Presidential Guard, Quacy Cummings.

He did not take his plea since no counsel represented him at the time and was not required to plead to the two charges.

Assistant Superintendent of Police, Vernette Pindar-Whittaker, told the court that, on December 15, at about 07:30 hours, Chimezie went to the south-eastern entrance of State House and spoke with Perreira.

According to Pindar-Whittaker, Chimezie became annoyed, got up from the seating area and attempted to walk through the security hut inside the compound of State House.

Perreira attempted to block Chimezie but he pulled a knife from his shoulder bag and knifed him five times. The men ended up in a scuffle and a female Presidential Guard came to Perreira’s rescue. She took out her service revolver, but Chimezie managed to disarm her.

It was gathered Cummings, who was at the south-eastern entrance intervened, but Chimezie discharged three rounds in his direction. Chimezie then attempted to flee on foot but shot on the leg.