A Woman and her lover have been arrested for allegedly battering her two children aged 5 and 2, scarifying their bodies in bizaire manners.

The police in Lagos state arrested the lovers identified as Busola Oyediran and her partner, Akebiara Emmanuel on Friday after neighbours reported the incident. 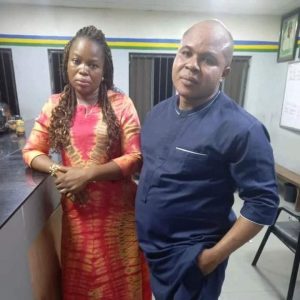 The concerned neighbours had alerted the police of the consant physical abuse of the minors by their biological mother and her partner.

Following the report, the police stormed the Egbeda/Idimu home of the couple and arrested them. The police later visited the hospital where the neighbours had taken the battered children for treatment.

When confronted, their mother claimed the children fell from a motorcycle and suffered serious injuries.

The spokesperson of the state police command, SP Benjamin Hundeyin, said the couple is currently in detention and will be arraigned in court on Monday, January 16.

He said the father of the children has been alerted, according to LIB in its report.

10 Die As Bus Rams Into Truck On Lagos – Ibadan Expressway