by The Daily Crucible
in News
1

The Ogun Governor’s Elders Advisory Council has commended Governor Dapo Abiodun on completion of some projects inherited from his predecessor, Senator Ibikunle Amosun.

The Council advised Governor Abiodun to remain focused on improving the lots of the state through more people-oriented projects. 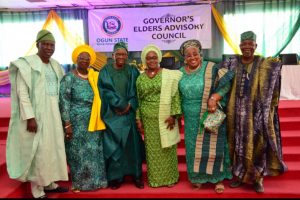 Chairman of the Council, Chief Oluleye Okuboyejo who gave the commendation on Tuesday at the Council’s End of Year meeting in Abeokuta,  the Ogun State capital, said that “the real selling point for this administration are confirmations that projects inherited from previous administrations are being completed.”

According to Okuboyejo, the Governor deserves a second term in office because the “story of his good performance continued to rend the air.”

He urged members of the council to contribute their quotas in any way possible to complement the gains of the present administration.

Fight Over Leftover Fuel Leaves One Dead In Lagos