by The Daily Crucible
in Sports
0

In keeping to his promise of raising the bar of sports and sporting activities in Ogun State, as a follow up to the shower of money on the state’s contingent to the just concluded National Sports Festival hosted by Delta State, Ogun State Governor, Prince Dapo Abiodun, has commenced immediate renovation of the MKO Abiola international stadium Abeokuta.

Scaloni Wants Messi To Play On Till 2026 World Cup

In this regards, the 10000 capacity stadium will be fully covered to provide adequate comfort for the spectators. The reconstruction of the stadium which started yesterday, continued this morning as more materials and workers arrived the site. The facelift is expected to be completed in four weeks.

The stadium named after the winner of Nigeria’s June 12 presidential election, Bashorun MKO Abiola, who also hailed from Abeokuta, has been used as a multi-sports events centre for over two decades and it has played host to state-owned and private football clubs including the Gateway Football Club and Abiola Babes International Football club.

While the stadium has also played host to local and international football matches, it has also produced stars that have proven their mettles globally in the world of sports. 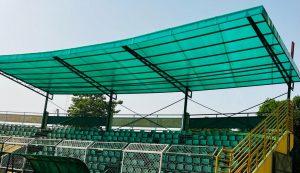 Presently, about twenty percent of the stadium is covered. The proposed arrangement of covering the whole spectators stand in stadium by the current Administration will no doubt add beauty and comfort and further raise the standard of the facility and prepare it for the 2023 National Sports Festival that Ogun State was recently given the right to host.

Scaloni Wants Messi To Play On Till 2026 World Cup