2023: Wilful Destruction Of Our Campaign Billboards, Others Shocking – Ogun APC

... Condemns Politics Of Desperation, Urges Police To Fish Out Perpetrators

by The Daily Crucible
in Politics
0 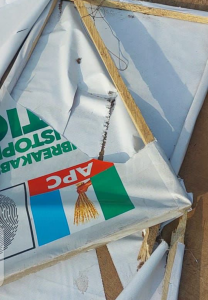 The Ogun State Chapter of All Progressives Congress (APC) has condemned, in very strong terms, the willful destruction of the party’s branded campaign materials, billboards and other signages in different parts of the state, especially in Abeokuta, the state capital.

Democracy Not For Quick Change – Obasanjo

In a statement issued in Abeokuta on Sunday and signed by its State Publicity Secretary, Tunde Oladunjoye, the APC described the act of destroying branded signages and other campaign materials of the party as a “desperate manifestation of do-or-die politics calculated to undermine the prevailing peace and stability in the state since the coming of the Dapo Abiodun Administration.”

While noting that such offensive acts of intolerance would not augur well for peaceful co-existence in the state, the party called on the law enforcement agencies to swiftly bring the perpetrators to justice.

The statement further reads: “We were shocked to witness the massive destruction of our campaign materials, billboards and signages this morning in Abeokuta; a carefully masterminded willful destruction carried out under the cover of the night. These beautiful campaign materials, apart from the creativity put into their production, also cost a lot of money. It’s saddening that some mistreats can go ahead and destroy them. .”

“Ogun State has been rated as one of the most peaceful states in Nigeria. The political intolerance that predated the 2019 general elections is now a thing of the past and any attempt to heat up the polity and return the state to that ignoble era should be condemned by all well-meaning people!”

“We, therefore, call on the police and other law enforcement agencies to be more vigilant and to bring the perpetrators of this despicable destruction to book. The party calls on our members and supporters to remain calm and go about their duties without taking the laws into their hands.”

“Our leader and governorship candidate, Prince Dapo Abiodun, is a man of peace and he has assured of peaceful and issue-based campaign in the run-up to the 2023 elections. This is what the party will stick to notwithstanding the current provocation.”

“Of course, we are aware that the growing popularity of our party and its candidates, as well as the unprecedented gale of endorsements by different organisations, groups and high-ranking royal fathers, have been a source of serious worry to our tattered opponents, even as imminent defeat stares at them. Let the opposition elements in the state wake up and face the reality; the latest machinations will not postpone their day of defeat.”

Onanuga, Alake And Obaigbena At Thessalonica

Democracy Not For Quick Change – Obasanjo

‘Nigeria, A Nation In The Wilderness Due To Low Literacy, Poor Reading Culture’ – Prof Adekola