•••Every Kobo Works For The State, Says Auditor-General 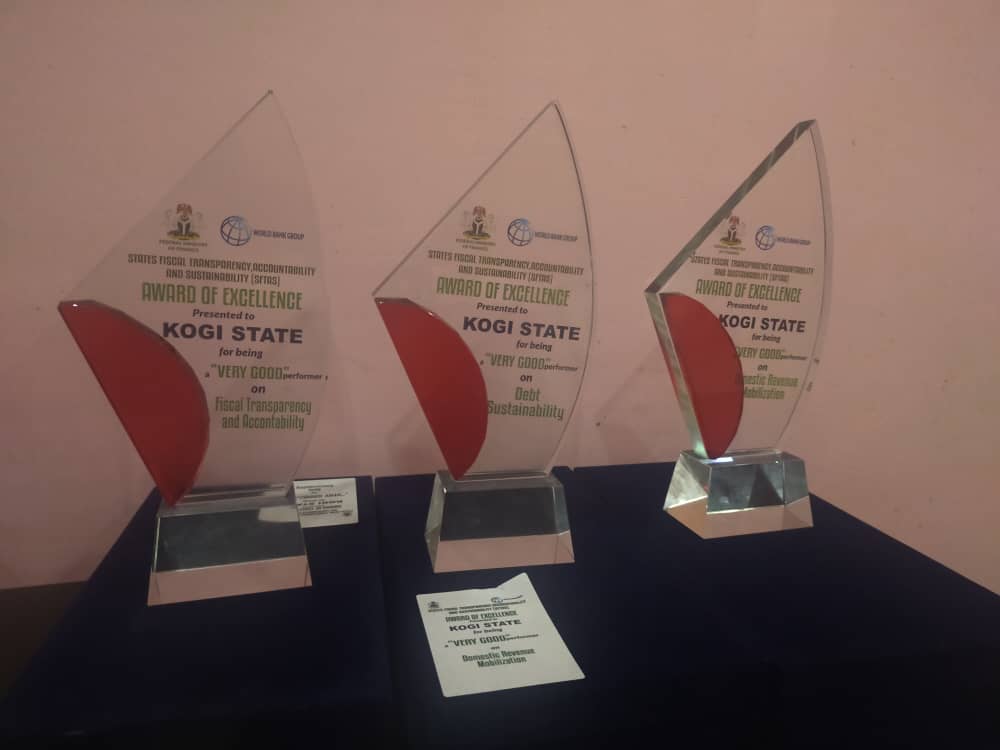 | The Daily Crucible | Tuesday, November 15, 2022
Kogi State has won the World Bank’s Awards of Excellence in three categories – Fiscal Transparency and Accountability, Debt Sustainability and Domestic Revenue Mobilisation.
The significant awards were conferred on Kogi State at the Federal Government of Nigeria/World Bank States Fiscal Transparency, Accountability and Sustainability (SFTAS) Dinner with Governors/Award Night, held at Transcorp Hilton, Abuja on Monday evening.
The objective of the World Bank’s State Fiscal Transparency, Accountability and Sustainability Program is to promote focus and attention of Nigerian States towards improvement of their PFM systems, processes and institutions, a statement on Tuesday, signed by the Commissioner for Information and Communications in Kogi State, Kingsley Fanwo, said.
The Auditor-General of Kogi State, Yakubu Okala, who spoke to journalists after the award ceremony attributed the celebrated success of the state in the areas of fiscal transparency and accountability to self-discipline, as well as the institution of a transparent and accountable governance system by Governor Yahaya Bello from the inception of his administration.
“The State is blessed with an incorruptible Governor who also provides leadership from all fronts, a professional to the core that has surrounded himself only with persons that have the capacity to deliver.
“The philosophy of the Governor of the State, His Excellency, Alhaji Yahaya Bello, is making every single kobo available work for the entity of the State, hence he has instituted self-discipline, as well as transparent and accountable governance system from day one of his administration.
“He does not condone any form of abuse or misuse of the state’s resources at the disposal of every responsible officer,” the state AuG said.
SFTAS is aimed at strengthening fiscal transparency to help build trust in government, facilitating accountability in public resource management and ensuring sustainability in the participating states.
The National Programme Coordinator, Ali Mohammed, who signed the invitation letter to states, said, “The SFTAS programme has achieved important milestones with remarkable improvement in fiscal transparency and accountability; increased domestic revenue mobilization; increased efficiency in public expenditure; and strengthened debt management.”
The dinner was therefore organized to celebrate the acievements of SFTAS since inception.
Recall that the World Bank, in July 2021, commended Governor Yahaya Bello for refunding $4.63 million surplus funds under the Nigeria Erosion and Watershed Management Project (NEWMAP).
The commendation was conveyed in a letter of appreciation, signed by its Regional Director, Shubham Chaudhuri, describing the step as a sign of good leadership.
According to the World Bank, the Governor’s action made it possible for the organisation to extend its projects to other states facing deficit funds and to extend the closing date of its projects.
ADVERTISEMENT
Tags: NEWS

Fashion Girls! These Are the 17 Chic Flats Everyone Will Want in 2018